My son plays tennis. But he doesn’t play tennis like I play tennis, which is fine. I play an aggressive game while trying to always improve both physically and mentally. When I was younger, I took lessons, even when I was the best in my age group, because I knew that my current skills would only take me so far – my instincts would only get me to a certain level. My son…he lives in the moment. He hits this one forehand shot that looks like his arm is broken – it’s a horrible thing to witness! And when I tell him this, his reply is, “But I usually win the point.” Me – “But it’s horrible form and you’re creating horrible habits that are going to stick with you. Those other players are going to get better…and you’re not. They’re going to be crushing that shot of yours next year.” The Boy – “But right now I’m winning.” Okay, trying to be rational to a 17-year old (especially your own) is like trying to wrangle cats.

I totally understand instant gratification. I’m a victim of it all the time. But when we’re talking about developing skills that will be used for years and years…it only makes sense to do the right things now so those years and years will be as easy as possible. As that relates to steno, I get MANY working court reporters who come back to work with me to clean up their writing because they’re tired of spending days cleaning up their transcripts. Their goal in school was to pass tests and start working. And they did…and now they’re paying the price. Their goal should have been to write well and start working. The tests take care of themselves.

“If I don’t get at least part of the word down, I’ll have no chance of knowing what the word is.” True. But if you write half a word, you’re then telling your brain it’s okay to write half a word. You may pass that test, but you’re also slopping up your writing. Better to drop that word, then practice it later. 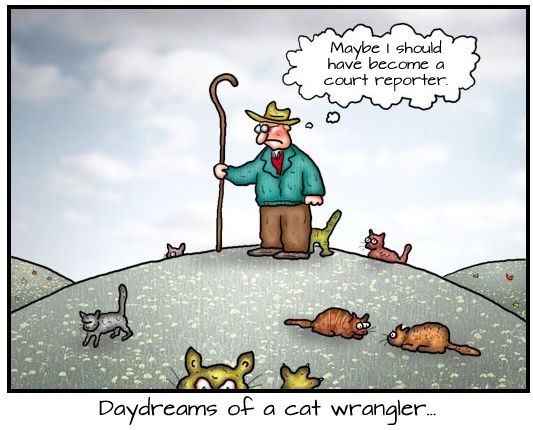 Buffer
This entry was posted in General Steno Info. Bookmark the permalink.