Court Reporting Documentary – Behind the Scenes!

Later this week we will have the “world debut” trailer for our court reporting documentary.  Most movies don’t have a fancy debut for their trailers, but….most documentaries don’t get shown in big theaters, so we thought this would be a fun way to get the movie out there.  We’re showing it off at the DRA convention in CA.

When I decided 2 years ago that I was going to film a court reporting documentary, I was pretty…stupid.  Not to be hard on myself, but looking back, how could I not know what I was getting into?  I guess “naive” is a better word.  But I’ve always been at my best when I back myself into a corner.  I usually figure a way out.  “Of course I can – and will – make a court reporting documentary!”  And then I figure out how to make a movie. 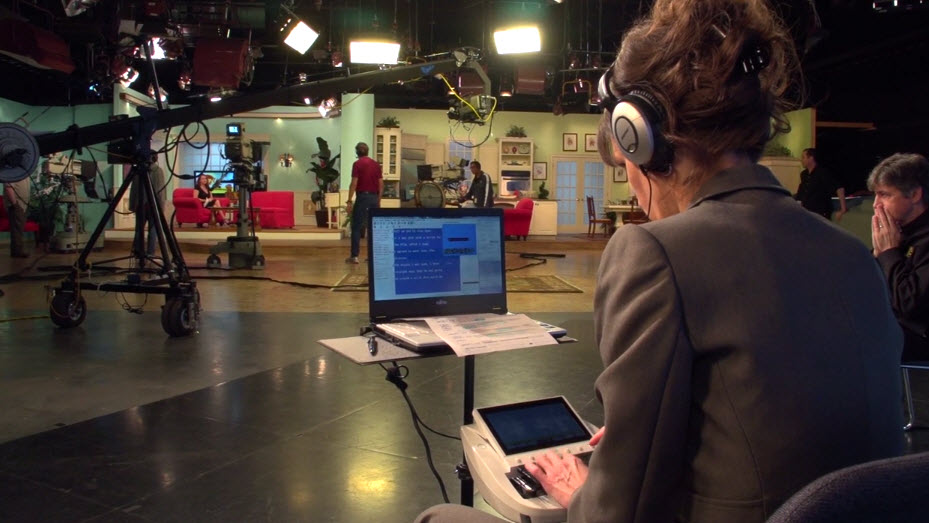 Dee Boenau and Mark Kislingbury on the Daytime set in Florida. That’s me between them…doing nothing!

So what were my big mistakes?  First, before we started filming, I had a “script” – a way I figured the documentary would head – the stories we’d tell.  But I quickly learned that that’s how scripted movies work – not documentaries!  You can only plan a documentary so much.  I assumed it would be about court reporting, with the thread of the Guinness attempt winding in and out of the story.  Turns out the contest angle was as strong, or stronger than the other parts.  It comes down to personalities.  That’s where you have to go.  You can’t write a documentary – you have to let it write itself.

Second, I never understood how filmmakers could work on documentaries for years!  Now I know 🙂  We didn’t have a page of script to shoot each day.  I didn’t know what the answers in our interviews would be.  I never knew how exactly one thing would lead to another – somewhere I never thought of before.  Again – you have to let the documentary tell its story.  And that means new interviews, interviewing a second time, taking chances.

Third, I now have a bad case of “Damn!  I should have asked that!” syndrome.  While going over shot footage, I came across many answers that should have gotten a follow-up question…but I never asked.  Not the end of the world, but you do need certain things to tie story lines together.

Finally, I found out just how opinionated people are about how I should make my court reporting documentary…MY documentary 🙂  “It’s going to talk about CART writing, right?”  “How could you not mention electronic recording?”  “I once did a deposition with a cat on my lap – how hysterical is that?!  That should totally be in the movie!”  Uh…I think you should put that in YOUR movie.

1 Response to Court Reporting Documentary – Behind the Scenes!