Win Before You Begin – Court Reporting

So I know I talk/compare steno a lot with tennis, but that’s because that’s what I know – tennis and movie stuff – those are my other main interests.  So…another tennis story for you that involves my son – this happened just this week – the wounds are still fresh! 🙂 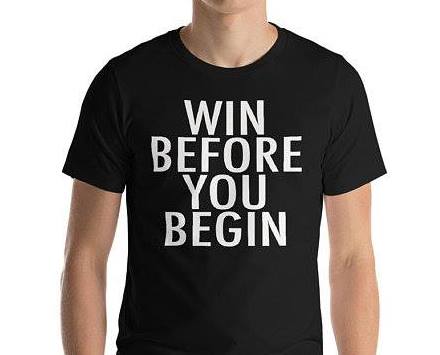 My son just finished his tennis season at his high school – he had the best record of any player from his school in years!  Okay…that says more to how bad his team is than how good HE is (sorry, but it’s the truth!).  After the season is sectionals, where all the best players from each team have a tournament to decide which single players are best.  My son has had anxiety issues over the years, so it’s not odd that he was nervous, but…

The morning of his first match (they get to miss school!) he was dressed like normal –

I knew at that point we were in bad shape.  Mentally, he had already lost.  I could tell he was going to play, hoping not to lose, rather than playing to win.

He lost before he ever walked onto the court.  He wasn’t mentally prepared.  And because he wasn’t mentally prepared, he physically (and mentally) failed.  And I’m not saying anything he wouldn’t agree with here 🙂  He stayed home from school yesterday because he was such a mess.  Initially he blamed it on the flu…then later agreed it was his attitude.  We made a fresh start today.

YOU need to be mentally prepared before you even put your fingers on those steno keys.  “Let’s do some solid writing!”  “Accurate strokes today!”  “Remember to breathe – relax.”  “My fingers know what to do.”  Anything else is defeating. “I haven’t practice a lot lately, so this should be rough.”  Wrong.  “I’m having a bad writing week.”  Wrong.  “This speed is too hard.”  Wrong.

I’m not saying you should be in denial – steno is tough!  But you don’t need to add extra barriers by caving into those thoughts.  Win the day before you even begin!