Okay – maybe the title of this article is a little harsh.  Steno briefs in court reporting DO work.  But there’s a time and a place for everything.  I have a saying in my SimplySteno program – “You need to learn the longcuts before you can learn the shortcuts.”  You have to have that foundation of at least knowing how to write things out before you can trim away the fat.  I know the urge is write short, short short!  And you can…but not from Day 1.

Like the image below, using steno briefs might get you to the cheese faster, but you may do some damage along the way. 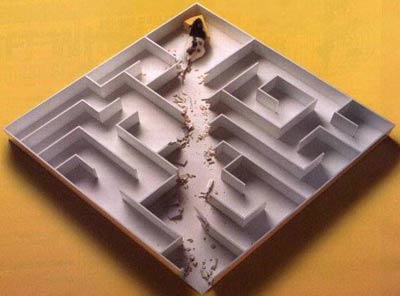 At 60 words per minutes, it takes 6 seconds for the speaker to say, “Ladies and gentlemen of the jury.”  That’s one of the first steno briefs learned in Briefland.  One stroke for 6 words – look at all the time you saved!  But you also may have just screwed yourself.  Because I may just say, “Ladies and gentlemen in court today.”  And here you are…waiting…relishing that moment when you can use that fancy steno brief you learned.  Only problem is, I didn’t say what you wanted…and now you’re 6 words behind.

You may said, “It’s okay, I have a brief for ‘Ladies and gentlemen” too!'”  But what are the odds, with you as a brand new student to speedbuilding, of you going back, using the proper steno brief for that, then picking up the 3 words after that, while staying on track?  I’m going to say the odds are roughly…zero percent.

There comes a point – I believe around 120-140 words-per-minute – when students start to hear words as a phrase (when it happens), rather than just hearing them as singular words.  That’s when steno briefs really start to come in handy – when you can hear a phrases while you’re trailing.  It becomes a natural stroke opportunity, rather than a forced one.