Steno – The Olympics – It’s the StenOlympics!

Steno and the Olympics rarely, if ever, collide!  I’m here to change that.  This blog should probably be in 2 parts – “StenOlympics” and “What Students Can Learn From Olympic Athletes.”  But it’s in 1 part, so deal with it 🙂 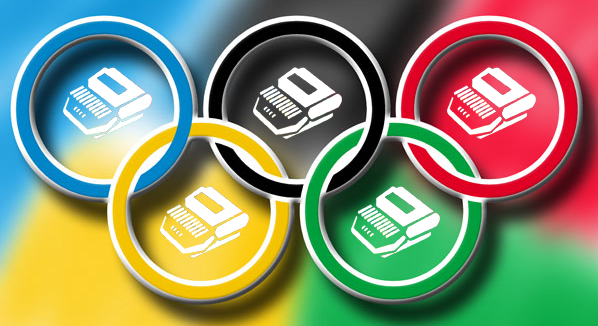 Freestyle writing – Everyone hooks up to their CAT software – a paragraph is read very slowly – steno writers take it down – then we check to see who wrote it in the least amount of strokes (accurately).

Focus writing – Again, a paragraph is read.  But this time, steno writers get Koosh balls thrown at them.  It will test both their writing and dodging ability – kind of like a court reporting version of Wipeout.

Surprise Steno! – You sign up for this before the convention.  At any point during the convention, an official can come up to you and have you write a paragraph on the spot.  Then again, that means everyone would have to carry their machine and computer around at all times.  Maybe I haven’t thought this one through.

Guinness Record Attempt – Okay – this one is serious.  I think that every 4 years, NCRA should allow between 3-7 of the best steno writers to go for the world record.  Yes, I’m biased, as I helped arrange the last one.  But I think it was an amazing event!

Steno Students and Olympic Athletes
(partly from a StenoLife article)

We’re right in the middle of the Olympics – fun times in Sochi!  Ice skating is always the most watched event.  I can’t say that I will watch any of it this year – just not my thing.  But I DID watch the year Sasha Cohen fell down twice in the finals… and won the silver!  Besides failing to show up, falling down is the very WORST thing you can do… and she fell twice… and she won silver.

Another scenario… Yevgeny Plushenko is in the last minute of a brilliant routine.  A triple toe loop – stuck it!  A double axle – nailed it!  A quadruple Flargen – yes!  Okay, I made the last one up.  But just as he goes up for a triple Lutz…SPLAT!!  Yevgeny hits the ice and ends up on his back (gasps!).  He rolls over… elbows on the ice… and shakes his head, upset with himself.  And he lays there… and lays there… and the music plays… and… he… lays… there.  We’ve seen it a million times before.  Just when…what?!  We haven’t?!

Oh, that’s right!  When skaters fall, they DON’T just lay there!  Before you can blink, they’re back up on their skates and continuing with their routine – like they never missed a beat!  Not only that, they have a smile on their face!  Now, I’m not naive.  I realize they are forcing those smiles, but still!  They fall.  Commit the biggest error they can make.  And they hop up and power forward like it never happened.  That’s what Brian Boitano would do, and that’s what you need to do too.  You fall, you get up.  You error, you correct.  You slip, you steady yourself.  Be a skater and go for the gold!